So today was the day I’ve been waiting for since the 1990s when I played Gabriel Knight: The Beast Within: my trip to Neuchwanstein Castle. I went with a local tour company, called Mike’s Bike Tours, which does a lovely tour of the castle, along with a few other cool activities, like a bike ride out to Swan Lake.

So I was up early and had a breakfast of bread, cold meats, cheese and yogurt. I hopped on the train to go to the Marienplatz and then walked to the tour company shop. I checked in and soon, I was bound for Neuchwanstein. The ride up was fun and entertaining (and educational because we learned a lot about Ludwig II), but things got real when I got my first peek at the castle in the distance.

It doesn’t even look real because it’s just SO picture perfect. And of course, it seems tiny (until you get up close). We arrived at the tourist center and immediately got on bikes and started biking around the area. I haven’t been on a bike in about 15 years, but it turns out, it really is something you never forget how to do. We stopped at a few places to take photos and then went to Swan Lake. 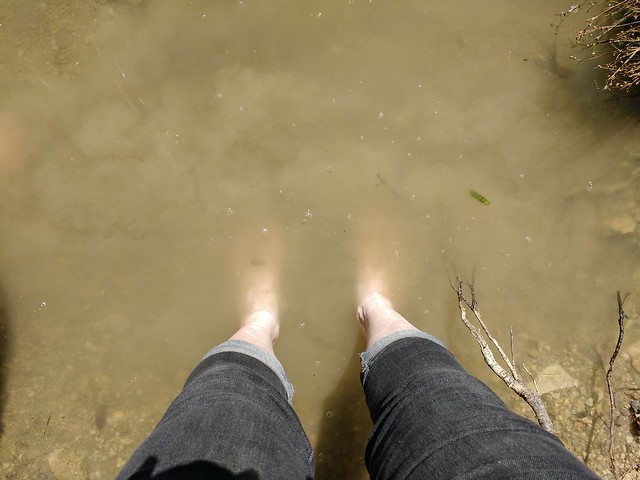 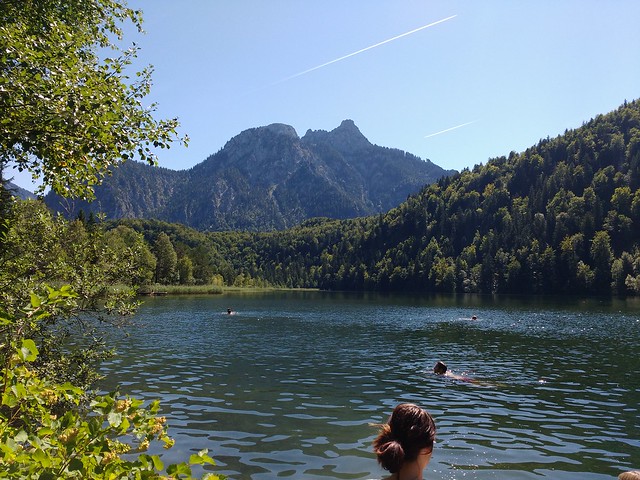 There were some people swimming, but that water was COLD. LOL

Then we biked back to the tourist area and had lunch. I finally tried kasespatzle, which is sort of like mac ‘n cheese, but a million times better because it’s got like four cheeses and grilled onions on it. Words cannot describe how good it was.

But the best part came when the apple strudel arrived. I’ve been thinking about apple strudel since I booked this trip, and now I’ve had good and proper strudel. 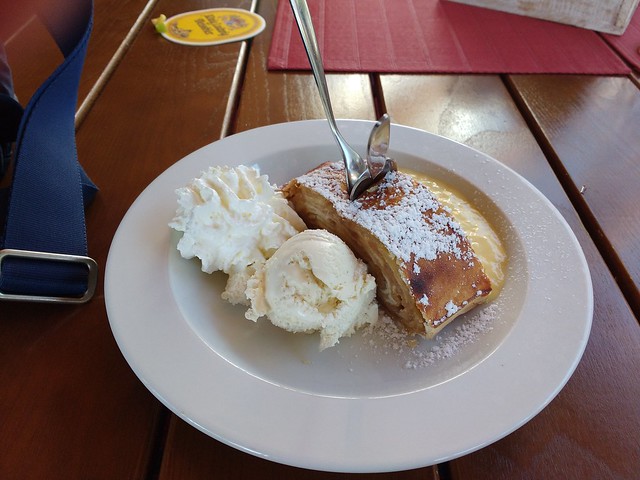 Then we had a choice of hanging out there in the restaurant (which I did because I couldn’t move after finishing off all that food), going on an alpine slide or just walking around. It got pretty warm today, so chilling and digesting seemed like a good option to me.

Soon, though, it was time to walk up to the castle. I opted for the short bus ride up (although there was still a hike up to the castle from the drop-off point). The view, to say the least was AMAZING. 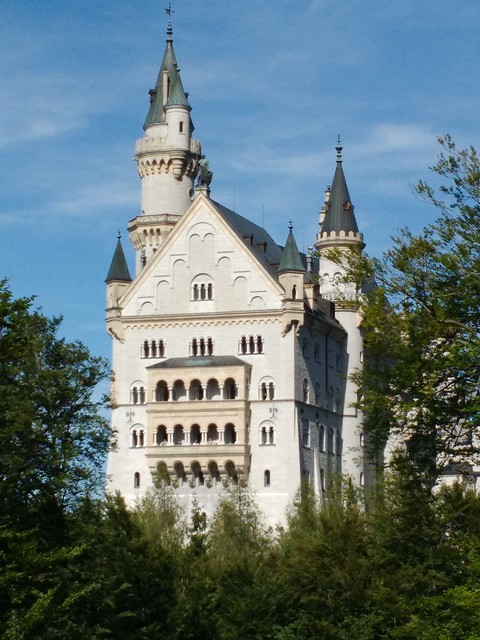 You just can’t beat that. And the castle was AWESOME. I walked around a bit and just gawked at it. It’s easy to see how it inspired Walt Disney. We also took a tour inside (no photos allowed) and saw all the great rooms I remember from Gabriel Knight: The Beast Within. Cool, huh? Screw the history. THIS CASTLE WAS IN A VIDEO GAME.

The tour is short because Ludwig II only managed to complete about one-third of the castle before his mysterious death. So if I win the lottery, I’m buying it and finishing off the other rooms. At least that’s the plan.

I bought a few souvenirs in the various gift shops (including a print to hang at home to remind me I finally saw the castle I’ve been wanting to see) and then we headed home to the sounds of Wagner (yes, I entertained notions of leading a singalong of “Kill the wabbit.”)

It was, literally, the perfect day. The weather was beautiful, the castle was amazing, I talked to some interesting people and had a wonderful time. I’m not certain what else this trip will top today, but I’m ready for the next adventure tomorrow. Of course, after sleep. Which, I think, after today’s busy schedule, should come easily enough.