So I made it to Munich. After two rather smooth flights (I think I even got possibly an hour of sleep on the way, although some novel ideas popped into my head that forced me to stay awake and write it all down), I landed in Germany.

As many of you know, I attempted to learn German, but it never really stuck with me (it’s hard). So I was a little worried about going somewhere I really don’t speak the language. However, upon landing, I was encouraged by seeing all the airport and train signs in both English and German, and the train’s announcements were also done in both languages.

I also discovered that even those Germans who say they only speak “a little” English still speak a lot more  English than I speak German. They’re also very friendly.

My first order of business was to check into my hotel, the Hotel Laimer Hof. After getting turned around (and that was even with Google Maps, which I misread), I finally found where I needed to be. My worse fear was realized when I was told that my room wasn’t ready. However, they told me it would be ready in about 10 minutes and made me a cappucino while I waited. How nice is that?

Once my room was ready, I got a quick tour of the hotel and explanation of how things work around here. This is my room: 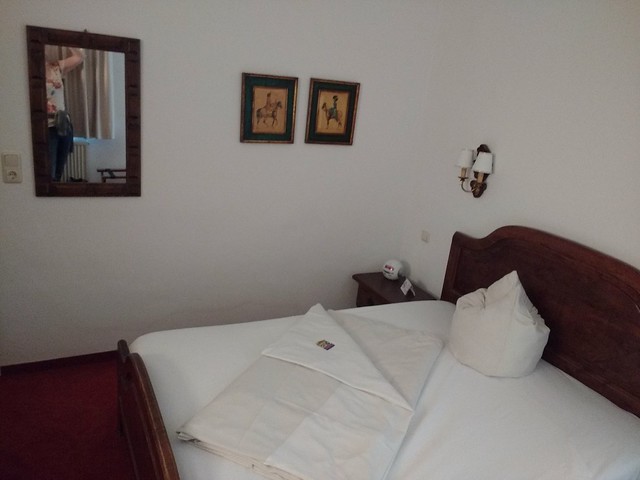 Fighting jet lag, I managed to walk to the nearby Nymphenburg Palace, where the mad king Ludwing II was born. The grounds are beautiful, especially on a breezy and sunny day, so I walked around until I wandered into the cafe (which was good, because it was about lunch time, and I was hungry). I sort of just ordered a few things from the menu with words I recognized, like kase and apfel.

I ended up with a delicious roasted salmon with a risotto that was bathed in a red pepper and cheese sauce. For dessert, I had this cinnamon ice cream kind of thing with fried apple bits. And, of course, there was wine. How could I have a nice meal in Germany without a glass of Riesling. Except a U.S. size glass is only, apparently, a half sized glass in Germany.

So loaded up on food and wine, I bought a ticket to go see the inside of the palace, which was, as expected, stunning. All the beautiful paintings, especially on the ceilings: they were awe-inspiring. 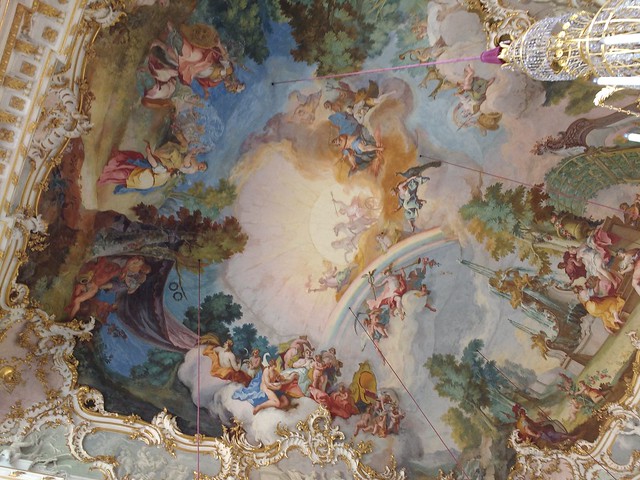 Oddly enough, I didn’t buy anything in the shop, but I was so jet lagged that I only made it to two buildings anyway. By the time 3 p.m. Germany time rolled around, I was exhausted.

So I went back to my room and went online and did everything I could to try and stay awake. Finally, I decided to go see a traditional beer hall around 4:30, so walked to the nearby Hirschgarten, which seats 8,000 people at any given time.

Fortunately, it wasn’t that busy and I dined on pretzels and a mug of radler bigger than my head times two. I am not joking: 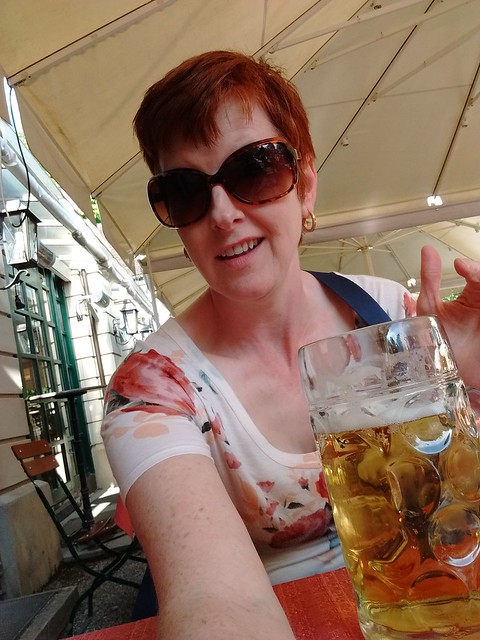 I did, however, look over the extensive Hirschgarten menu and decided to return because they have a lot of traditional Germal favorites, like kasespatzl, which is basically the German version of macaroni and cheese, but the Germans are all like “go big or go home” (see the size of that radler), so you know it’s probably the most amazing thing ever.

And that was my day. It’s not a lot, but it’s a little pat 7 p.m. and I’m about to drop. I can now get a good 11 or so hours of sleep and be up and ready to tackle Neuchwanstein tomorrow. I can’t wait! I’ve been wanting to see Neuchwanstein since I played Gabriel Knight: The Beast Within.