I had a good plan today: the spend the days in the museums because maybe, just maybe they will have good air conditioning.

And I was right! I arrived at the Alte Pinakothek as soon as it opened this morning. But when I walked in, I felt nothing… no air. I almost panicked, but bought my ticket (museum tickets in Munich are only 1 Euro on Sundays) and decided to see how bad it was.

Then I entered the first gallery and I was hit with gloriously cold air. I’m talking, goosebumps cold. It was AWESOME. Really, it’s the little things. Fortunately, the art was also good. The Alte Pinakothek is classic art, which isn’t something I’m insane about, but I still enjoyed the pieces I saw. And I enjoyed the wonderful a/c.

Of course, when lunch rolled around, I had to leave that wonderful a/c to eat in the stuffy cafe. But the eggs benedict was quite good (apparently, the cafe only does breakfast and brunch on Sundays). This museum could have taken my whole day, but about half of it is closed for renovations, so I headed over to the next museum.

The wonderful thing about Munich is that most of the museums are in this one area and are literally a stone’s throw from each other.

Next, I landed at Pinakothek der Moderne, which was definitely more up my alley. I’m a modern art buff (although when I say modern, I usually only like things up until about the 1970s, so that’s not REALLY modern). And this museum was awesome. Not only was the art fantastic, but its design was really cool, too.

Of course, I got peckish and needed a snack. And a glass of wine. I had to leave the a/c to get it (WTF, Munich? Can’t we eat in a/c SOMEWHERE IN THIS GODFORSAKEN CITY?), but it was a little breezy, so I didn’t sweat it too much. I figured I would feel better if I had this chocolate roll thing with Bavarian creme and cherries inside of it, and I was right. 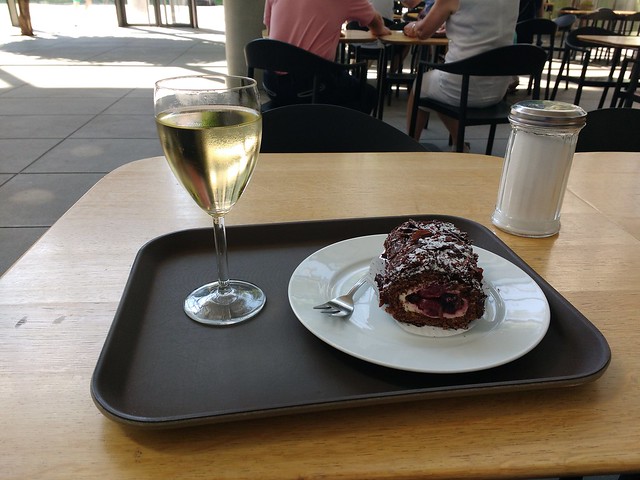 I sat there for awhile until it started getting a bit too warm (and I started to sober up to realize how warm it was getting).

Then I indulged in more modern art. This was really a great museum and I was very impressed with the collection. There was also a cool exhibit there (I forgot the name) with a sort of mixed media presentation of an apartment. I can’t really describe it, but it was interesting.

Two air conditioned museums down, one more to go, or so that was the plan. I headed over to the Brandhorst, which is another modern art museum, but it has probably one of the best Andy Warhol collections in the world. I finally saw Marilyn up close and personal, along with a few other pieces that were awesome. My favorite, of course, was the original book Warhol illustrated, 25 Cats, and I really wanted a reproduction of it, but of course, no such thing, apparently exists. The original limited edition print is a little out of my price range. Boo.

Of course, that made me think of my kitties and how much I miss them.

And, at that point, I was museum’d out. But the day was still relatively early, so I did what Munich folks do when it’s hot out: I headed to the English Garden. There, this is what they do: they float down the lazy river, letting the swift current carry them through the park. 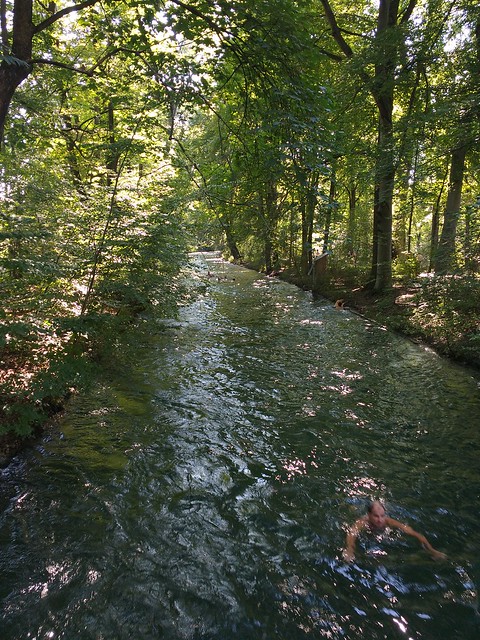 I honestly wished I’d brought my swimsuit, because that water sure looked inviting. Instead, I stuck my toes in and encouraged people drifting by to splash me. I also got a girl to hit me with her super soaker, which felt AWESOME. That’s how you cool off in Munich. Everyone was having fun and laughing and they really made me feel a part of the city.

I walked around the gardens a bit and caught the surfers (there’s a wave pool), some ducks, lots of trees, the usual park things, but then the water evaporated off my body and I got hot again.

So I decided I’d head to Hofbrauhaus for dinner and a drink. Except that Hard Rock Cafe is across the street and it had one thing Hofbrauhaus didn’t: air conditioning. So I did the touristy thing and went towards the air conditioning. And I ate good old-fashioned American food (mac and cheese) and had a drink in a Mason jar, just like a red-blooded American. And I even got a t-shirt, because why not? If you’re going to go tourist, you go all in, right?

I also got seated underneath the jacket Bob Geldof wore during Live Aid, which, if you know me, made me go all fangirl. Geldof is a hero of mine and I seriously wanted to take that jacket home with me.

Now, though, I’m sitting in my hotel room, praying that we actually get the rain we’re supposed to tomorrow so that maybe it won’t be such a bad day. I want to see the Residence, but I’ve still got museums on my list, so if it’s hot, that’s where I’m headed: towards the a/c.

I hate summer. It’s a little better in Europe, but this trip would have been more enjoyable if the weather was like it usually is this time of year: cold enough for sweaters and scarves. This warming trend the world is going through sucks.