So today marked my final day in Germany, and although I’ve enjoyed my time here, I’m ready to get home and back to my cats, my family and my friends. And air conditioning. It’s really the little things that count, right?

So today’s plan was to get to the Residenz when it opened at 9 a.m. and somehow I managed that after a quick breakfast at my hotel. The Residenz is a former palace and some of its interiors still contain their original decor and design fitting for royalty. It’s actually quite beautiful, although its heartbreaking to read about the parts of the Residenz lost forever during World War II.

I started at the Cuvilles Theatre, which had its boxes saved two days before the original version of the theatre got bombed in World War II. This theatre was absolutely stunning. 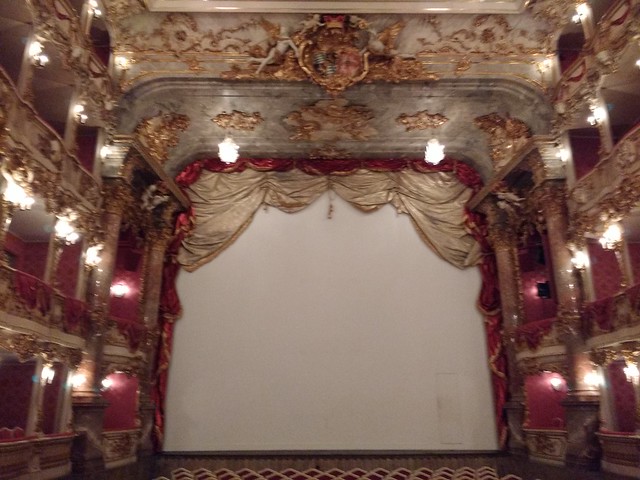 Blurry non-flash camera photos can’t do it justice, but you get the idea, right?

I then made my way to the Residenz proper, where the royalty of Bavaria once lived, worked and sleeped. It was really cool because there weren’t a lot of tourists out and about, so I literally had many of the rooms to myself. I felt like royalty myself! Except that I’m sure if I’d sat on any of the thrones, I would’ve been tossed out. 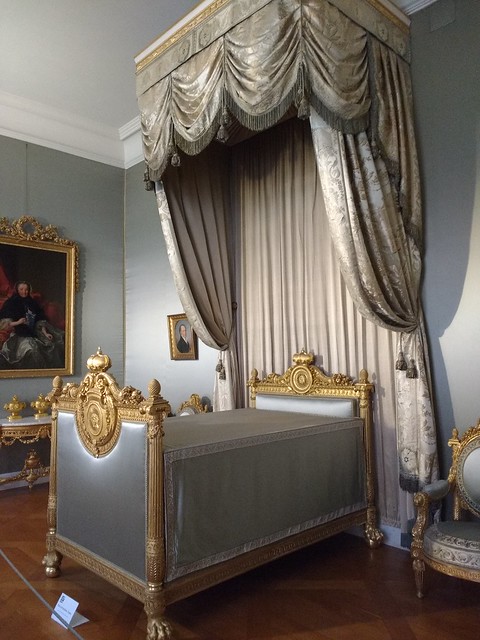 I walked through decadent room after decadent room. And all that walking made me hungry. Eventually, I realized it was nearly noon and my stomach was growling.

So I though I’d check out the Hofbrauhaus. And I did, for about five minutes. In that five minutes, I felt like I was cooking in an oven. There’s no ventilation, no fans, and I couldn’t take it. I prefer the beer garden close to my hotel where I can sit outside and breathe.

So I got up and went to the restaurant at the Platzl Hotel and randomly chose the day’s special: jagerschnitzel with spatzl. I had no idea what I ordered, but when it arrived, it was tasty. 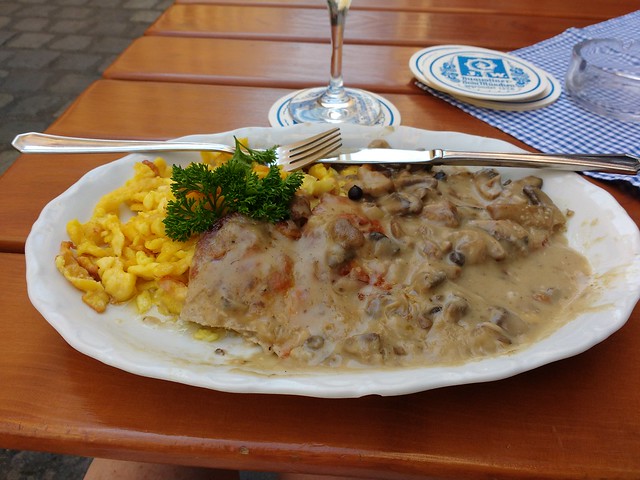 There was some guy sitting across from me, some kind of celebrity, I think: people were asking him for autographs. I have no idea who he was, but he looked a lot like The Master as played by Anthony Ainsley on Doctor Who.

I also had more apple strudel, my last in the city. It wasn’t quite as good as the strudel I had near Neuchwanstein, but it was still tasty.

Then it was time for souvenir shopping, which I’d planned for the day. And the shops around the Platzl were all air conditioned! I was looking for a few things not just for myself, but for others.

I have a tradition of getting a cat figurine when I travel: it all started in London when my friend I was with bought me a Byzantine cat. I’ve started collecting these cat things in my curio cabinet, so I looked for one in Munich. Now, Munich seems to be more of a dog city, but one of the souvenir shops carried Goebel figurines, and there were cats! I picked out one with stripes because it reminds me of my Anders. 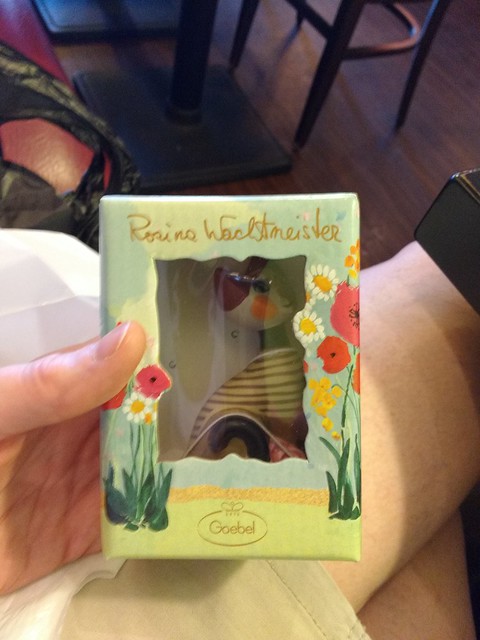 I still had one souvenir to get, but I left that area, which was a big mistake. You’d think the Marienplatz would have rows upon rows of souvenir shops, right? IT DOESN’T!!! Instead, it’s all retail establishments. There is one little kiosk, but it has very little. So I had to walk a few blocks to find a shop that carried what I was looking for (I won’t say what because it’s a gift for someone).

Finally, with purchases in hand, I needed air conditioning. I was hot, sweaty and getting rather grumpy. I also had to pee. And of course, public toilets aren’t so easy to find in Munich.

So I ducked into this huge department store on the Marienplatz, the Galeria. And not only did it have bathrooms, but it also had free Wi-Fi and air conditioning. Meaning that I went up to the cafe after using the bathroom, got some cake and a cold tea drink and sat there for an hour in glorious bliss, surfing the internet and enjoying a slice of apple kuchen. This was heaven.

Not wanting to leave heaven, I left the cafe, but stayed inside the store, where I partook of the wonderful air conditioning and shopped, eventually finding something I needed: new bras. And I found some that fit well, and you ladies know how hard that is. It was so nice to find my actual size, too, than have to try on a ton of larger sizes because of vanity sizing (America, I’m looking at you).

I finally rolled out of the department store, cooler and happier, and ducked quickly into the U-Bahn tunnels (which are also nice and cool-ish) to head back to the hotel via U-Bahn and bus (I discovered the bus route this morning that stops only a block from the hotel).

I dropped off my things and had one final dinner at “my” beer garden, Hirschgarten. I had meatballs and potato salad, followed with an ice cream sundae (to cool off because it’s still hot).

All in all, not a bad way to end a vacation. Now I get to go home and dance around in my very cold air conditioning, hopefully remembering Munich with a smile.

I have, though, learned a lesson: from now on, I book hotels in Europe with a/c and I travel a little later in the year. I’d rather deal with snow (like my first trip to London) than the brutal summer heat. I just wasn’t bred for warm weather.